A letter from a fan to fans

The Milwaukee Brewers suffered a difficult loss on Saturday, but this season was unforgettable and next season, will be even better.

It’s been a few days since the season has ended, and this loss stings. The Brewers took the series to Game 7, but a home run took away our hopes and dreams of the Crew’s first World Series birth since 1982. The season may be over, but remember this. This may sound cliche, but there were a lot positives coming out of this 2018 season and fans should be excited for what’s coming.

The first positive: the Crew shut people up.

Every year, sports “experts” make their preseason predictions. Where were the Brewers going into this season? “86-76” or “the Brewers have no chance against the Cubs.” No one expected this much to happen going into the 2018 season. If someone predicted that the Crew would be this successful, give yourself a pat on the back.

And when the Brewers got good? “The Brewers will lose in the wild card,” or “they’ll lose to the Rockies.” But no. They won the division and they swept the Rockies. Analysts have looked down on this small market team. And look at them now. They were just one win away from the World Series.

Corbin Burnes. He came up to the bigs in the middle of the season, was lights out, and has shown his potential. He could be a top of the rotation guy. Burnes has a hard fastball sitting in the mid to high 90s with a nasty curveball that makes hitters look foolish. Fans should be excited about Burnes once he enters the rotation next season.

Brandon Woodruff: What a performance at the end of the season. We got a taste of him last season, but it didn’t look good. But he came into 2018 on a mission to show why he was a top prospect. He became one of the key guys in September and October and he could be the ace of the this Brewers squad next year. Also…you can’t forget about this:

Freddy Peralta: He has had his down games, but when he spots both his pitches, he is almost unhittable. He makes his low 90s fastball look 100 with his delivery and when his curveball is working, it’s going to be a long day for the opposing lineup. The future is bright for Freddy. He’ll be a huge part of the Crew’s pitching staff next season. 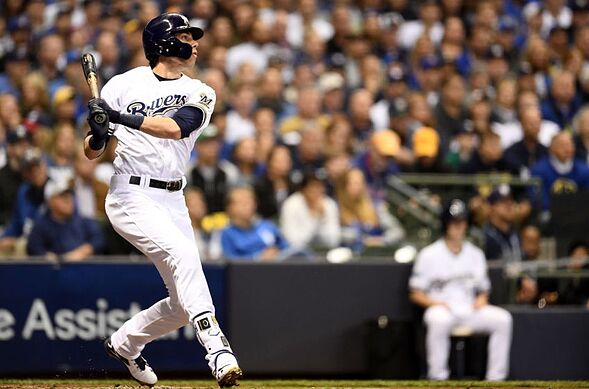 MILWAUKEE, WI – OCTOBER 20: Christian Yelich #22 of the Milwaukee Brewers hits a solo home run against Walker Buehler #21 of the Los Angeles Dodgers during the first inning in Game Seven of the National League Championship Series at Miller Park on October 20, 2018 in Milwaukee, Wisconsin. (Photo by Stacy Revere/Getty Images)

Next, Christian Yelich. What a season. An All-Star. A future silver slugger AND future MVP of the National League. This kid is incredible. His swing is one of the best in the game. He flies around the bases with his long strides. And his fielding is game changing. In the second half, he was unstoppable, carrying this Brewers club to their first playoff berth since 2011. He may have gone down in the playoffs, but Yelich is going to make a huge impact these next four years. (In Stearns, we trust).

Last: The memories. This 2018 team could be the most entertaining team in Brewers history (It may be the 1982 team, but I don’t remember…because I wasn’t alive). There were characters like LoCain, Suter, Aguilar and Arcia that put smiles on players and fans faces. And moments that made this season what it was.

From Yelich and Braun going back to back to beat the Cardinals:

To Nate Orf hitting his first career home run and earning himself a curtain call on his teammates shoulders.

To beating the Cubs at Wrigley Field (Miller Park South) in game 163 to win the division.

These memories of this Brewers team will last a lifetime. From “show me love”, to “LETS GOOO”, Brewers fans will never forget what this felt like to win and see the players having fun at the same time. And most importantly, make it to the playoffs for the first time in seven long and painful years. And I know for a fact, we’ll get to have that feeling of winning again and again for the next couple years(jinx knock on wood).

A lot of people may be depressed (including myself), but in four months, the Brewers will be back, getting ready to earn themselves another NL Central title!