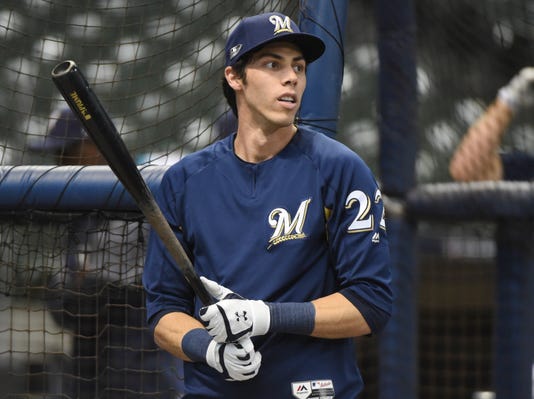 After surviving not one but two scares with the deadly wildfires still ravaging much of California, Christian Yelich was pleased to report Monday that he is OK and safe in his home state, at least for the present.

“It’s all right now but it got pretty crazy there for a while,” the Milwaukee Brewers outfielder said in a telephone interview from his mother’s home in Westlake Village, Calif., where out-of-control wildfires have destroyed nearby residences.

“Everything has calmed down here a bit now. But there’s going to be a lot of people that are going to need a lot of help. A lot of homes have been destroyed around here.

“It’s been a rough few days out here. A lot of the state is in trouble right now. It’s definitely tragic. We’re just all hoping for the best right now.”

Yelich, 26, the favorite to win the National League most valuable player award on Thursday, is still not allowed back in his own home in Malibu, Calif., which underwent mandatory evacuation when the “Woolsey” Fire reached that community near the end of last week.

Brewers teammate Ryan Braun and his family also evacuated Malibu safely, as did Mike Moustakas, who played the final two months of the 2018 season with Milwaukee after coming in a trade from Kansas City. Team principal owner Mark Attanasio also has a house in Malibu but reported via email that he and his family were safe and his home was still standing “so far.”

That particular fire had consumed more than 91,000 acres of Los Angeles and Ventura counties, destroying hundreds of buildings and homes from the canyons to the San Fernando Valley to the beaches on the Pacific Ocean.

“I’ve been here in Westlake for the last few days,” said Yelich, who recently tweeted a video of a helicopter drawing water from an adjacent lake to fight the nearby fires.

“Hopefully, Malibu opens back up in the next day or two. I think that area is starting to cool down. I’ve been talking to Braunie and Moose. They got lucky as well. The fires were closer to where they live. Somehow, we all made it out OK so far.”

The sadness for Yelich and many others in the Thousand Oaks/Westlake area extends beyond the raging wildfires to the lives lost in the mass shooting at the Borderline Bar & Grill last Wednesday. Twelve victims as well as the shooter died not far from where Yelich played baseball at Westlake High School.

“That was just down the road,” said Yelich, who tweeted a message of support and prayers the next day, including for the police sergeant killed trying to stop the shooter. “That was tragic. That was the main news, then the fires sort of took over. It has been a terrible week, all the way around, for our community, that’s for sure.”

Heartbreaking whenever tragedies like this occur and especially when they are in your own hometown. Thousand Oaks is a tremendous community and will support those who need it the most at this time. Prayers are with the Victims and their families, including SGT Ron Helus of VCPD.

Yelich originally committed to playing on an all-star tour of Japan last week and this week but withdrew to get some rest after the Brewers played deep into October before losing to Los Angeles in Game 7 of the NLCS.

With all of the heart-wrenching events happening at home, he has been relieved not to be on the other side of the world, wondering how family and friends were faring.

“I’m glad I ended up not going,” he said. “It looks like a great experience and a great time but I’d rather be here, helping out anyway I can. I just feel for all of the people here who lost their lives in the fires and the shooting, as well as those who lost their homes overnight. It all has happened so fast.

“This is when people pull together to help each other, no matter how long it takes.”

Times like this offer a true perspective of what’s really important but Yelich is expected to receive good news on the baseball front when the MVP awards are announced. He became the favorite in the NL after leading the Brewers’ late-season charge that allowed them to overtake the Chicago Cubs for the NL Central crown in a Game 163 showdown at Wrigley Field.

“I guess we’ll find out in a few days,” he said. “I answered a lot of questions about it over the final month of the season. Now, we’ll find out who it is.

“It would be a cool moment if it happens. I would celebrate accordingly with friends and family if it works out for me. We’ll see how it plays out.”