Brewers’ have their first full-squad workout of spring 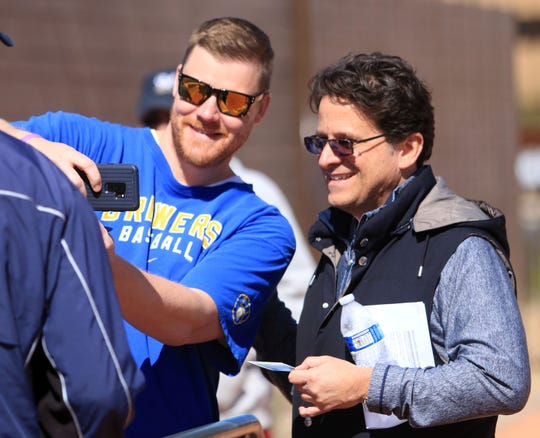 On the field: It was a large day Tuesday, with staff principal owner Mark Attanasio and supervisor Craig Counsell addressing the staff in the morning with the to start with full-squad workout pursuing immediately afterward.

“We’re in a model-new position with a new group. You stage into that room and it is a diverse room for most people,” Counsell reported. “The concept is, ‘What’s future?’ On the lookout ahead. What we are seeking to complete is extremely challenging and that involves the full awareness hunting ahead on how to get greater and the issues we’re going to confront and how we are going to react to those issues.”

Matters you hardly ever assumed you’d see in Phoenix. #CactusCrewpic.twitter.com/8vRnuojS1s

It was also a little jarring to see a “Frost Hold off” indicator posted on just one of the exercise fields, with temperatures dropping into the 30s right away and in the early mornings of late.

“It just would make it really feel a little little bit extra like residence,” quipped president of baseball operations David Stearns. “We can deal with it.”

Cactus Juice: Only minutes soon after the information broke Sunday that Mike Moustakas was returning to the Brewers, Christian Yelich tweeted a GIF of a particular person in a moose costume doing a funny dance.

On Tuesday – and with Yelich hunting on – Moustakas was requested if he could look at in fact donning a moose costume now that he’s again with the firm.

“I noticed that,” he reported with a giggle, referring to Yelich’s tweet. “That was pretty very good. I’m not going to be putting on a moose fit.”

Countdown: 36 days until finally the Brewers’ season opener on March 28 vs. St. Louis at Miller Park.

Shaw has been Brewers’ best defensive option at position
After falling game short of World Series, Brewers full squad gets back to work: ‘It’s great’