The Brewers’ outfielder finished the season on a tear to run away with the National League MVP award.
Lou Saldivar, Milwaukee Journal Sentinel 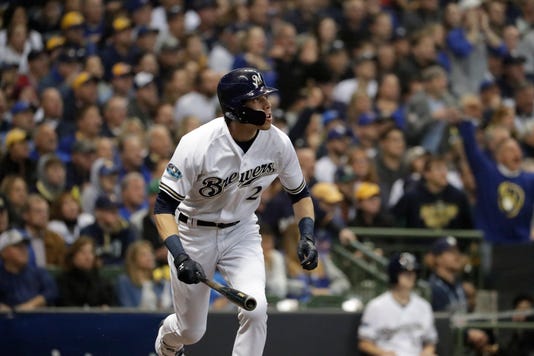 There were many viable candidates for National League most valuable player during the 2018 season but as the respective races heated up over the final weeks, Milwaukee Brewers outfielder Christian Yelich separated himself from the pack.

Accordingly, it was no surprise that Yelich was named National League MVP on Thursday when balloting by the Baseball Writers Association of America was revealed. Yelich was the runaway winner, getting 29 of 30 first-place votes. The other first-place vote went to New York Mets pitcher Jacob deGrom.

Yelich won easily over fellow finalists Javy Baez of the Cubs and Nolan Arenado of the Rockies. Boston’s Mookie Betts was voted MVP of the American League.

Yelich, 26, became the fourth Brewers player to be named league MVP, including two-time winner Robin Yount (1982, 1989). Rollie Fingers was the American League winner in the split 1981 season, and Ryan Braun claimed NL honors in 2011, the last time the Brewers went to the playoffs until their breakthrough in 2018, led by Yelich.

Ballots were cast by two BBWAA members in each of the 15 NL cities, with voters required to list their choices, ranked 1 through 10. First-place votes are worth 14 points, with nine points for second, eight points for third, etc.

Nick Piecoro of the Arizona Republic was the only voter who didn’t pick Yelich first. Yelich finished with 415 points, followed by Baez with 250 and Arenado with 203. Brewers outfielder Lorenzo Cain, who received votes as high as third place, finished seventh with 109 points.

Yelich was surrounded by family and friends, including Cleveland Browns quarterback Baker Mayfield, as well as Brewers teammates Ryan Braun and Mike Moustakas, now a free agent, when he got the news at his family home outside of Los Angeles. He wore a Los Angeles Fire Department cap and paid tribute to those fighting the wildfires in his neighborhood and other areas of California.

“It’s awesome to share it with friends and family, people who have had a huge impact for most of my life,” Yelich said. “It’s nice to see some smiles on people’s faces after the tough week this area has had. A lot of my buddies here were out in their backyards, trying to keep their houses standing.

“It’s been a tough week out here, not only with the fires but with the mass shooting (at a nearby nightclub) just down the road from where I grew up. There’s been a lot of destruction out here. It’s nice to see some people smiling for once.“

Of winning the award by such a large margin, Yelich said, “If I did (see it coming) I would have been a lot less nervous than I actually was. You’re hoping for the best. It’s a huge honor. That season was a crazy ride. To culminate it with this honor is hard to put into words right now. I’m very appreciative of it.”

Yelich qualified as the best player in the league after a second half for the ages. After the break, the left-handed hitter batted .367 with a .449 on-base percentage and .770 slugging percentage, with 25 home runs – four more than his previous high for an entire season – and 67 runs batted in over 65 games.

When the Brewers needed it most in September, Yelich continued to step up his game, batting .370 with a .508 OBP and .804 slugging percentage, with 10 home runs and 34 RBI in 27 games. Remarkably, Yelich drew 24 walks while striking out only 16 times as the Brewers went 20-7 to claim the NL Central crown, erasing a five-game deficit and beating the Chicago Cubs in a Game 163 showdown at Wrigley Field.

“It was a magical second half, not only for me but the whole team,” Yelich said. “The environment in Milwaukee down the stretch was unbelievable. You’re playing in a pennant race. Every game mattered. We needed to keep winning to get to the playoffs. As a player, I think that brings the best out in you.”

Yelich finished first in the NL with a .326 batting average, becoming the Brewers’ first league champion, .598 slugging percentage, 1.000 on base plus slugging, 343 total bases, 164 on base plus slugging plus, .422 weighted on-base average and 166 weighted runs created plus. He made a run at the Triple Crown before finishing tied for second with 110 RBI and tied for third with 36 home runs. Yelich was second with 118 runs scored and third with a .402 OBP.

As if those gaudy numbers were not enough, Yelich became the first player in franchise history to hit for the cycle twice and the first major-leaguer to do it against the same team – the Cincinnati Reds, on Aug. 30 and Sept. 17.

Yelich regularly heard chants of “MVP! MVP!” from Brewers fans over the final weeks of the season, and said that’s when he first thought about the possibility of winning the award.

“It’s hard to describe what that feels like. I remember having to calm myself down the first time they started doing it,” Yelich said. “You try to push it from your mind because you have so much at stake as a team. You’re just trying to focus on winning that day, and you figure all this stuff will play out afterward.”

The Brewers hoped for big things from Yelich when they sent four minor-league prospects to the Miami Marlins in a Jan. 25 trade, including No. 1 Lewis Brinson. But he far exceeded those expectations with a breakout season that helped the Brewers break a seven-year playoff drought.

That same day, the Brewers signed free-agent outfielder Lorenzo Cain to a five-year, $80 million deal, with the expectations that he and Yelich would transform an offense that had been mostly hit-or-miss in previous seasons. With Cain often batting leadoff and Yelich second, they consistently set the table for the lineup while also playing superb outfield defense.

“To think about where I was 11 months ago to where we are now is hard to describe,” Yelich said. “I don’t take it for granted. I know how hard it is to accomplish what the team did this year, and individually as well.”

Speaking for the team, Brewers general manager David Stearns said, “We’re all happy for Christian. It’s a well-deserved recognition. He was the best player in the league when it mattered most. I think we can all say he earned this.”