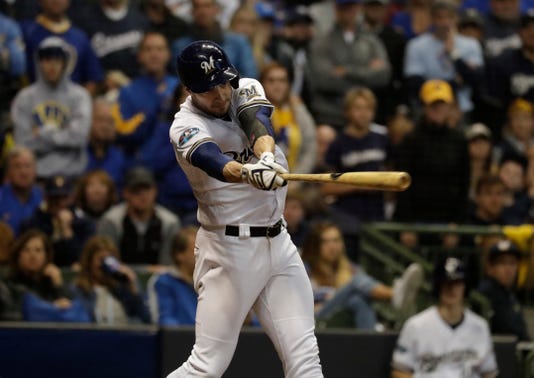 This was a year like no other for Ryan Braun.

And so, this was a loss like no other for Ryan Braun.

“Yeah, I would say so,” the Milwaukee Brewers leftfielder said Saturday night after  his third trip to the postseason ended in a 5-1 loss to the Los Angeles Dodgers at Miller Park. “Absolutely.

“I’ve never been one game away from the World Series. The fact that we got to play this game at home, just all the way around; yeah, absolutely, the toughest loss for me.

“Right now in the moment it’s disappointing. Very confident that we were going to win today. We thought we’d go to the World Series.”

How Braun deals with this National League Championship Series Game 7 loss in the short term, and then the long term, has the potential to set an example for the rest of the team, particularly its youngest members who plan to return to challenge again in 2019.

First, Braun will get away from baseball. The days and weeks ahead will be for family, for his kids, and to settle in to a new routine that doesn’t pull him on the road every other week.

While that break is necessary, it’s such a drastic change for players to scatter across the country after being so close for so long.

But Braun has so much to recall fondly about this year.

“And there’s so many positives to take away from this season,” said Braun. “Those will be the things that I focus on as I move forward.”

Braun, 34, said this team is the most close-knit team of any on which he has played, and that he’s never had more fun playing than he did down the stretch.

He listed the accomplishments that will go down in Brewers history: the winning streak that set up Game 163 for the Central Division title and then extended into the playoffs, 12  games in all.

“Win that game, on the road, at Wrigley (Field), obviously being able to sweep the NLDS, and make it to a Game 7 here,” said Braun. “The most enjoyable were the celebrations. That’s something you don’t get to do very often.

“I think every time you get an opportunity to celebrate, you should fully embrace it. We got to celebrate three different times and every one of them was so special.”

Braun said the fact that no one expected this kind of year so quickly from a rebuilding organization added to the uniqueness of the season.

“I trust their vision,” Braun said of management and the coaching staff. “They deserve so much credit for getting us to this place. Everybody should be proud of the year we had.”

That means that at some point Braun is going to take away all the positives from the season in an effort to build on it for next year.

“I think he’s right on,” said Christian Yelich. “That’s just the message our team feels. It’s the truth. It really is the truth. As athletes, as competitors, you realize it’s not always going to go your way. You use it to build, and you’re constantly trying to improve, as a player, as a team. That’s what we’re going to do.”

But for a moment, Lorenzo Cain could relate to Braun’s feeling after the game. He stared at the Miller Park diamond the longest after the game, frustrated that another team was celebrating on his field. It was similar to how he felt with Kansas City in four years ago.

“You have got to let it motivate you,” said Cain. “That’s the toughest loss he had; the toughest loss for me was the year in ’14 when we lost the World Series. Guys showed up the very next year, all business, all hungry, ready to go. We’ve got to have that same attitude.”

That’s the plan for Braun. In due time. But for now this is just what it is. Disappointment. And the end of a great season.

“He’s invested. He’s invested in to this community,” said catcher Erik Kratz. “He’s invested as a Brewer. If I felt it in the five months that I was here, I think he’s been here for 12, 13 years. He feels that. He sees the love of his team. It’s his team.

“Yeah, that’s a huge loss. You can’t compare losses. They all suck.”