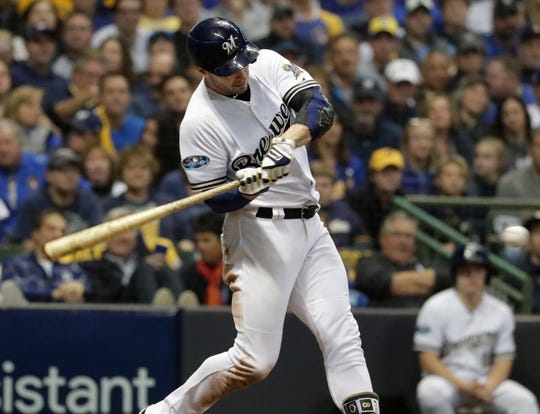 PHOENIX – Because the deep-dive numbers showed Ryan Braun hit in a lot of bad luck last season, he could have shrugged it off, gone home for the winter and relaxed, figuring it wouldn’t happen again.

Instead, the Milwaukee Brewers’ veteran leftfielder began working with a hitting coach on tweaking his approach at the plate, more specifically his bat path. He laughed when asked if he had become a card-carrying member of the “launch angle revolution.”

“They are pretty subtle changes,” said Braun, whose batting average in 2018 on balls put in play was .274, compared to .327 for his career. “But it’s something I hope everybody recognizes at the end of the season, the end results.

“I feel good about where I’m at. I feel confident about the changes I made. I feel like what I was doing was still working. If you look at the batted ball profile – exit velocity (93.4 mph), line-drive rate (23.1%), hard-hit percentage (43%) – all of that stuff is still elite.

“So, if I’m able to make some subtle adjustments and subtle changes, hopefully I can maximize my success in that batted ball profile. I don’t think I’m at a point where I’d be able to make any drastic changes. Fortunately, I didn’t think that was something I needed to do. But some subtle changes I’ve been working on all off-season I feel confident with now, and I’ll continue to work on them the next six weeks as we get ready for the regular season.”

But, just when the Brewers needed him most, Braun began to produce. Some of his hard-hit balls finally fell for hits, or better yet, sailed over the fences. His .843 OPS in August and .963 OPS in September were his best of the season. Over that final month, he compiled a 145 OPS+, an indication of the damage he was doing as the team pushed for the playoffs.

Considering that strong finish, was it really necessary to make changes?

Thank you! You’re almost signed up for Packers Update

Keep an eye out for an email to confirm your newsletter registration.

“Every player, you try to assess where you’re at, assess what you’ve gone through and try to find ways to ultimately maximize your success and your performance, and put you in the optimal position to be successful,” said Braun, who hit .344 with five homers and 12 RBI over the final 10 games.

“Some of this bat path stuff is just trying to put me in the optimal position to have success, give me a little bit more room for error. I think there’s a way to make things a little better, and that’s what I tried to do this off-season. I feel excited about it, looking forward to getting on the field in some games and see how some of those things play out.”

Braun, 35, talked last fall about being re-energized by the intense atmosphere of the pennant race. After the Brewers embarked on a large-scale rebuilding process in 2015, he wasn’t sure he’d get to experience October baseball again before retiring. Now, with two years remaining on a five-year, $105 million extension originally signed in 2011, he expects to continue being part of a competitive club.

And why not? After the Brewers led the National League with 96 victories last season and advanced within a game of the World Series, management kept most of the team together for 2019, adding a huge piece in free-agent catcher Yasmani Grandal. Braun also was excited to see the Brewers bring back good friend Mike Moustakas, a late-season acquisition in ’18.

BREWERS LIVE: Follow tweets from Tom Haudricourt at Todd Rosiak throughout the season

“I think it’s about as good a lineup as I’ve ever been part of, if you look at it on paper,” Braun said. “On top of that, it just adds to our depth. As we all know, over the course of a season, your depth will be tested. The more quality players you have starting on an everyday basis, as well as coming off your bench, the more beneficial it is as you inevitably deal with adversity as a team.”

Braun has been around long enough to know that nothing is guaranteed. The Brewers thought they were going to the playoffs in 2014, only to collapse down the stretch. Last season, they went in the other direction, going 20-7 in September and finishing the season with eight consecutive victories, needing every one to overtake the Cubs in Game No. 163 for the NL Central crown.

Asked if he thought this team possibly could be better, Braun smiled and said, “That’s the goal, right? At least one game better. Bringing ‘Moose’ in for a full year, having Yasmani for a full year, hopefully – knock on wood – having Jimmy Nelson back at all, will all be tremendous additions to our team. We’re going to need it.

“As we’ve seen, our division has gotten a lot better. I think everybody, if you look around our division, has improved this off-season. We know we have our hands full, so having all those guys for a full season is something that should really benefit us.

“For everybody, it starts back at square one, where the focus becomes preparing yourself every single day, starting to come together as a group… and ultimately everybody reaching their potential and trying to be the best versions of themselves as a player. There’s not a lot of room for error but we have the talent to be a better team than we were last year.”

How many games Braun plays in 2019 remains to be seen. He has been plagued in recent seasons by various maladies, most notably lower-back issues and chronic nerve pain in his right thumb. Manager Craig Counsell has given Braun scheduled days off to try to keep him healthy and productive, and will continue that plan this season.

“I anticipate something similar this year,” Counsell said. “We have to just monitor usage; we have to be careful there. The point is to get the player out there when he’s as close to healthy as we can get him. And we have to do that with Ryan.

“All of our numbers say he was a little unfortunate last year in some of his luck. There’s a level of productivity he’s still capable of, and I think it’s more than last year. More than the numbers showed.”

As for the off-season tweaking Braun did with his bat path, Counsell said, “As much as anything, Ryan was looking for some education on his swing. That’s what a lot of guys are using this (information) for, just education about their swing and a different way of thinking.

“I think it’s just Ryan trying to get better, like everybody else does. All players are looking for ways to improve.”

322 Career home runs for Ryan Braun, most in Brewers history.

12 Starts at first base for Braun last season.

.340 Career batting average in the postseason for Braun.