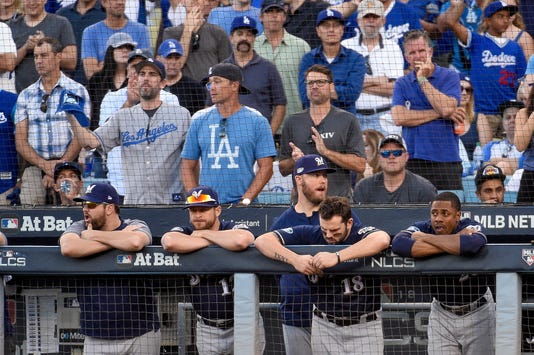 Members of the Milwaukee Brewers react during the eighth inning against the Los Angeles Dodgers in Game Five of the National League Championship Series at Dodger Stadium on October 17, 2018 in Los Angeles, California.(Photo: Getty Images)

LOS ANGELES – Since the postseason began, pundits have been dissecting the Milwaukee Brewers’ pitching staff and pitching plan as if they were insects in a high school biology class.

They don’t have enough starters. They can’t keep using the relievers this much. Too much “bullpenning.” What’s with this “opener” stuff?

Well, it’s not the Brewers’ pitching staff that has them on the brink of elimination in the National League Championship Series. It’s the sudden disappearance of their offense that has allowed the Los Angeles Dodgers to creep within one victory of a second consecutive World Series berth.

Of course, the Dodgers’ pitching staff has had something to say about this. In particular, Clayton Kershaw, who often hears about his postseason failings, was masterful Wednesday afternoon in topping the Brewers, 5-2, in Game 5 at Dodger Stadium.

This was not the same Kershaw who failed to make it out of the fourth inning in Game 1, allowing five runs (four earned) in a 6-5 loss to the Brewers. This time, the crafty ace had his breaking stuff working, which became even tougher to hit once afternoon shadows came across home plate, leading to seven innings of three-hit ball.

“He executed a lot of pitches today,” Brewers manager Craig Counsell said. “He didn’t execute in Milwaukee, and he executed today. I don’t think it was a vastly different game plan. It’s simple execution.”

The Brewers managed to score just one run in 13 innings the previous evening in Game 4, which the Dodgers won, 2-1, to turn the momentum in their favor. Thus, the Brewers scored a mere three runs over the last 22 innings, which simply won’t get it done.

So, after a travel day Thursday, the Brewers will try to stave off elimination Friday night at Miller Park in Game 6. They will have the home crowd back on their side and all that but it won’t matter if the lineup doesn’t find some way to generate offense.

Asked if the team’s .219 batting average in the NLCS and meager total of 16 runs scored (that’s also the Dodgers’ total) was more attributable to Los Angeles’ superb pitching or the Brewers’ collective slump, Ryan Braun said, “I’m sure it’s a combination of all of those things.

“I think the other team deserves some credit. They have a great pitching staff. It’s obvious they have a very talented staff. But we just picked a bad time to go through a rough stretch offensively. We’re going through a period where there’s a lot of guys not seeing the ball well.

“You combine all of those factors and we wind up in the position we’re in offensively right now.”

In particular, the Dodgers have neutralized Christian Yelich, the presumptive MVP of the National League. They have constantly pounded him up and in, and Yelich is not getting any good swings. The result has been the polar opposite of the final few weeks of the regular season, when Yelich took apart opposing pitching staffs seemingly at will.

Not that Yelich has been the only no-show at the plate. Mike Moustakas is batting a putrid .095 (2 for 21). Jesús Aguilar’s average has dropped to .222. Braun actually has one of the better averages at .238, which tells you something about the struggles.

“One run here, two runs there, that’s not going to cut it against the Dodgers,” said Lorenzo Cain, who bounced back from two brutal games at the plate (0 for 11, five strikeouts) with a single and RBI double. “I can tell you that.

“Hopefully, we’ll go home and regroup, and hopefully put up five or six runs (in Game 6). They’ve got a really good pitching staff over there. But, at the end of the day, we’ve got to find a way to get it done, regardless of the situation. As a team, as an offense, we just haven’t been clicking.”

After practicing a bit of baseball tradecraft, the Brewers will start veteran lefty Wade Miley for the second consecutive time in Game 6. It turned out he was actually an “opener” in Game 5, being removed after issuing an opening walk to Cody Bellinger on five pitches.

Now, Miley can pitch on regular rest (if you discount those five pitches) in Game 6, with Jhoulys Chacín fully rested for Game 7, if it comes to that. That’s a pretty decent position to be in on the pitching front, assuming the offense comes out from hiding.

The Brewers simply wanted the Dodgers to construct a lineup built to face a left-hander, then come in with right-hander Brandon Woodruff, who pitched three brilliant innings in Game 1. That’s exactly what happened, and for four innings that plan worked perfectly as Woodruff mowed through the Los Angeles batting order.

“Look, we’re going back home, to me, in a position of strength. And that’s part of it. We’re sitting in a very good spot, going home for Game 6. And we have a great opportunity. We’ve got Wade and Jhoulys lined up to begin the games.”

During their 12-game winning streak that was halted with the Game 2 loss at Miller Park, the Brewers played several “must-win” games and succeeded. But that was “must win” as in staying alive for the NL Central title, including game No. 163 against the Cubs.

This time, it’s “must win” or go home for the winter. If the Brewers want to make their first World Series appearance since 1982, they must put together a two-game winning streak at Miller Park, where they were 51-30 during the regular season.

“We’re in familiar territory,” Yelich said. “It’s a little bit higher stakes now. It’s win or go home now. We’ve got no other choice. One at a time. We’ve got to win the first one to get to the second one.”