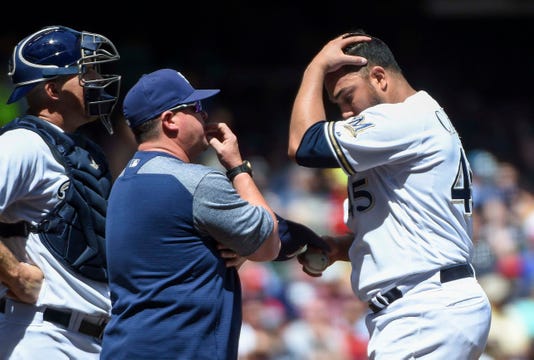 Pitching coach Derek Johnson’s departure apparently caught Milwaukee Brewers pitchers off guard, sparking speculation that there may have been discord among manager Craig Counsell’s staff in addition to what presumably was an offer from the Cincinnati Reds that Johnson couldn’t refuse.

The Enquirer’s Bobby Nightengale reported earlier this week that the Reds hired Johnson as their new pitching coach, according to a source, and the team’s formal announcement followed Friday afternoon.

Brewers general manager David Stearns acknowledged that Johnson – who would be manager David Bell’s first addition to his staff – left Milwaukee. And Johnson is the third coach no longer with the Brewers since the season ended.

LOVE THE REDS?Subscribe today to get access to all of our coverage

“If there was [friction], then they had a good way of hiding it,” said Zach Davies. “My sense of the coaches and players was that it’s one team that came together and bought into the fact that we don’t have an entire roster filled with superstars, but that we can win in other ways. We showed that. We made it to the seventh game of the NLCS. … I don’t think either of them left with bad feelings.”

Asked whether he ever sensed discord between Johnson and anyone in Milwaukee’s hierarchy, fellow starter Chase Anderson said, “No, not at all. I feel like they were all on the same page, as far as I could see.”

That didn’t mean either player saw it coming.

“I was pretty surprised about it, too, but coaches are no different than players,” Davies said. “It’s still a career, still job opportunities for them. Baseball isn’t a game anymore where you see managers or players on the same team for their entire career. At the end of the day, you sit back and think it was probably a better job opportunity for him. A new start — kind of where we were at three years ago with a new staff and some young guys. It does make sense once you sit back and then think about it a little bit from his perspective.”

“It’s going to be a nice little challenge when we face the Reds,” Anderson added, per McCalvy. “Because you know Derek is a smart guy, and he’s going to do the best he can to help his team win.”