Five takeaways from the sold-out Brewers On Deck event 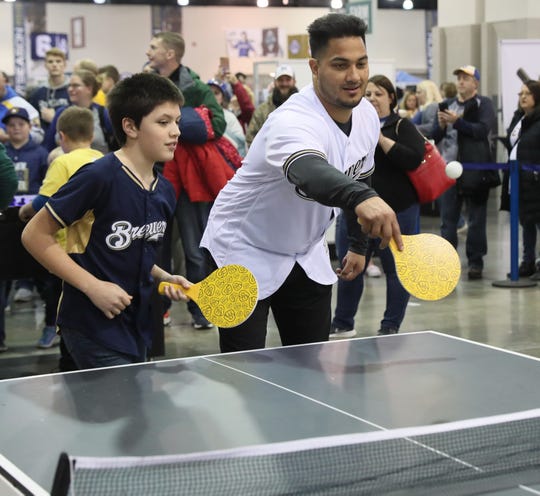 The 2019 Brewers On Deck event treated a sold-out crowd to a number of presentations, interactive opportunities and autographs Sunday at the Wisconsin Center in Milwaukee. There was obviously a lot to discuss concerning on-field matters for the season ahead, but the event frequently enables Brewers players and staff to flash their off-field personality as well.

Some of the notable takeaways:

Obviously, Christian Yelich was in demand 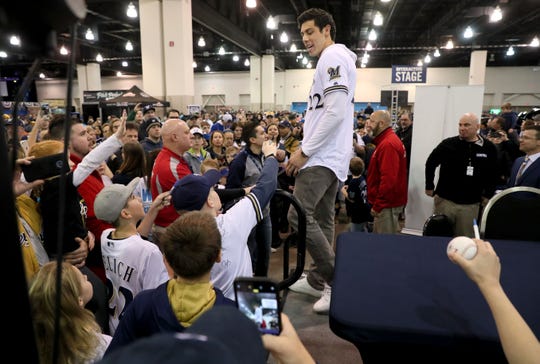 Fans young and old clamored for an autograph as the Brewers Christian Yelich leaves a radio interview at the Milwaukee Brewers annual On Deck fan event Sunday at the Wisconsin Center in downtown Milwaukee. (Photo: Michael Sears / Milwaukee Journal Sentinel)

It’s been a whirlwind off-season for Christian Yelich, and this weekend was certainly no different. On Saturday, he was in New York (along with manager Craig Counsell and general manager David Stearns) to accept his 2018 National League MVP award at the annual Baseball Writers Association of America dinner.

Just more than 12 hours later, he was at the Wisconsin Center in Milwaukee for the Fan Fest. And while Yelich was a must-see for many of the fans in attendance, the fervor around the outfielder isn’t just limited to Milwaukee.

“He’s a superstar in the world,” Counsell said. “We had people chasing our car down last night in the streets in New York.”

Get used to some new-looking Minor League swag 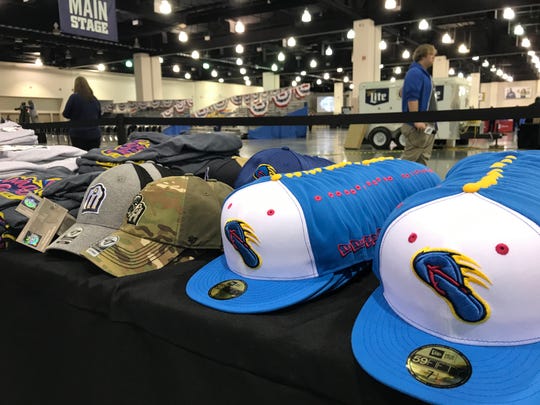 Lots of Brewers merchandise was available, from memorabilia to tickets, and it was striking how the minor-league system aesthetics have transformed. The Brewers will have a new Class AAA team in the San Antonio Missions, a team that employs a colorful palette. Not only that, but their former Class AAA affiliate, nee the Colorado Springs Sky Sox, remains in the organization but has moved down the food chain to Rookie League and re-branded as the Rocky Mountain Vibes.

If you’re in to collecting Brewers minor-league swag, you’ve got some catching up to do before 2019 begins. 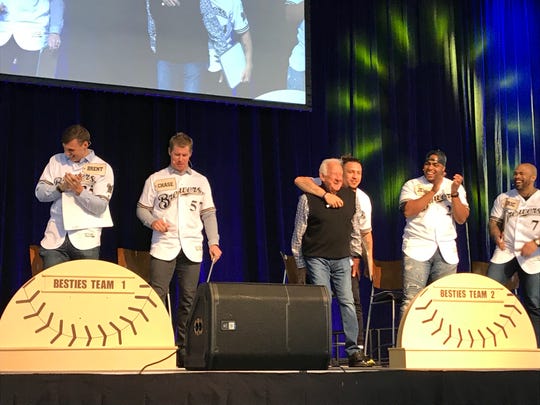 Brewers players clap for Bob Uecker as he steps onto the stage for the “Brewers Besties” competition at the 2019 Brewers On Deck on Jan. 27, 2019. The Brewers broadcaster was surrounded by (from left) Brent Suter, Chase Anderson, Hernan Perez, Jesus Aguilar and Eric Thames. (Photo: JR Radcliffe)

One of the many main-stage events held at the showcase was the “Brewers Besties” game, a riff on the Newlywed Game where two Brewers players competed to see how well they knew a third, thus earning the title of “best friend.”

Hernan Perez correctly guessed that Jesus Aguilar’s favorite city to visit was Chicago, and he then humorously crossed out “Wrigley Field” in dark black marker when Aguilar revealed a card showing his response.

Why was Chicago his favorite? Aguilar was asked and had a good response: It’s where the Brewers won Game 163 last year.

Lane Grindle, who first defeated fellow radio broadcast staple Jeff Levering for the title of Bob Uecker’s best friend, ultimately won the overall competition for possessing the highest score. Among his correct responses were guessing that Uecker’s favorite road city was Boston, favorite music was opera and favorite thing to say in the radio booth was, “Get up, get up, get outta here, gone.”

Also, it turns out Brent Suter’s favorite Jim Carrey character is Ace Ventura, not Lloyd Christmas – which is a surprise considering Suter’s spot-on impression during the Brewers “Dumb and Dumber” spoof that caught fire last season.

Can Ed Sedar read Pat Murphy’s thoughts or was something afoot?

Speaking of main stage activities, Brewers Game Night finished on a high note when third-base coach Ed Sedar needed just a few squiggled circles by bench coach Pat Murphy to identify “tailgating” in the “Draw It Out” final round.

The other two pairs in the competition, Corey Knebel/Brandon Woodrufff and Christian Yelich/Travis Wood, were perplexed how Sedar was able to guess so quickly. It’s a fair thing to wonder – earlier-game shenanigans had included Murphy mumbling the correct answers when he was supposed to be describing them in the “Talk It Out” portion of the game.

Coaches must have that same chemistry teammates have. For what it’s worth, Woodruff demonstrated he can draw a pretty good Bernie Brewer.

It was really dang cold outside

The inclement weather in Milwaukee (though comparatively comfortable compared to the snow and cold ahead) didn’t deter the crowd from lining up early to gain entry into the Wisconsin Center.

This year’s event featured a main floor with autographs and presentations and a lower level for kids events. Some players, such as Zach Davies, signed autographs exclusively for kids on that floor, and players milled about and spent time with youngsters.

Also, how cool is this video of a young fan meeting Orlando Arcia?