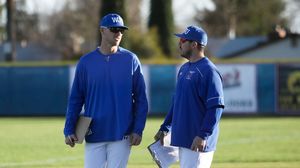 ROCKLIN, Calif. – After a historical season for the Warriors, head coach Jake McKinleyannounces his departure as he will continue his coaching career at the next level in the Major Leagues with the Milwaukee Brewers as a Pitching Coordinator.

“It’s with great excitement and a heavy heart that I’m making this transition,” McKinley said. “The opportunity to work with professional baseball players is a dream realized, but it’s difficult to leave such a great team.”

Athletic director Lance Von Vogt said it’s a bittersweet departure knowing McKinley is moving onto bigger and better, “The Brewers are getting what I consider to be the best young baseball coach in the country. We have been blessed to have Jake build our baseball program into a conference champion and national power. Whenever you have the major league’s recruiting your coaches to help them win a World Series then you know you are doing something right.”

In what could possibly the best turnaround season in collegiate baseball history, McKinley transformed the Warriors to a top-5 team in the country more than tripling the previous season’s win column and took home the GSAC regular-season title and GSAC championship trophy, all in just a years span. On top of that Jessup hosted their first NAIA Opening Round where the Warriors made it to the championships game losing a heartbreaker in extra innings, the farthest season run in program history.

McKinley credits his players and support staff for his successful time with the Warriors, “The last 18 months at William Jessup has been the best time of my life. The support of the administration and the opportunity to work alongside great coaches was a tremendous opportunity. Most of all, it was incredible to work alongside such talented players every day.”

Alongside McKinley was his strong support staff and counterpart, Trevor Paine. As an assistant coach specializing in hitting and recruiting last season, Paine was promoted to associate head coach early this fall after an outstanding offensive performance by the Warriors in the 2018 campaign.

Paine will take over the helm in McKinley’s departure after working under the record-breaking coach for the last year at Jessup and two seasons prior at Menlo College.

“It’s comforting to know that the program is in such great hands,” McKinley commented of Paine. “Trevor is one of the best young coaches in college baseball and I’m certain the Warrior program will continually evolve into one of the best destinations to play NAIA baseball.”

Von Vogt went on to praise McKinley for developing such a strong support staff that was made to lead in the future, “One of the best things that Jake did in his time here is surround himself with amazing people and put together arguably the best NAIA baseball staff in the country. That being said, we’ve been preparing for this day for quite some time just in case and it is without hesitation we’ve named Associate Head Coach Trevor Paine as the next Head Baseball Coach at William Jessup University.”

The 2018 baseball roster made history under the McKinley campaign with 41 wins, a program first GSAC regular-season title and GSAC Championship, 5 All-GSAC award winners, an All-American and Player of the Year in Austen Swift and the school’s first-ever MLB draft pick in Andrew Shaps. Not to mention heading into this season, the Warriors have already nabbed three spots on the NAIA Preseason All-American team.

From a 10-win season in 2017 to 41 wins in 2018, McKinley has built a nationally recognized program that will continue to make moves in the NAIA. His impact on Jessup Athletics is forever engraved in the history books and the future looks bright for this young coach.

“This is an opportunity that doesn’t come around every day and I couldn’t be happier for him to have the chance to pursue his dreams,” Von Vogt concluded. “Jake will remain as a valued lifetime member of our Jessup Athletics family moving forward and I know he will be integral in the continued success of our baseball program even from afar and while working for the majors.”