Looking back at the first two NLCS playoff games 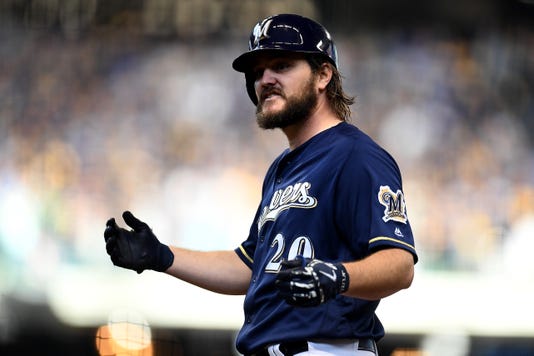 Wade Miley reacts after hitting a single in the fifth inning of Game 2 of the NLCS. Miley had two hits in the game and worked 5 2/3 scoreless innings.(Photo: Stacy Revere, Getty Images)

The Brewers experienced some highs and lows at Miller Park in the first two games of the National League Championship Series. Brewers beat reporters Tom Haudricourt and Lori Nickel join host JR Radcliffe to discuss the series, tied 1-1 and heading to LA. What to make of reliever Jeremy Jeffress; is he struggling or unlucky? What’s the outlook now that the team’s 12-game winning streak has been snapped, and how about the performances of Wade Miley and Brandon Woodruff?

Then, JR is joined by Brewers infielder Travis Shaw, who talked about his time in Boston (and the possibility of meeting his old team in the World Series) plus more during the Brewers workout on Thursday.

Download the mp3 file here, listen to the stream here or below, or subscribe to it in the Apple Podcasts or Stitcher stores.

Colorado Rockies trade rumors: The Milwaukee Brewers could use Trevor Story at third base – Rox Pile