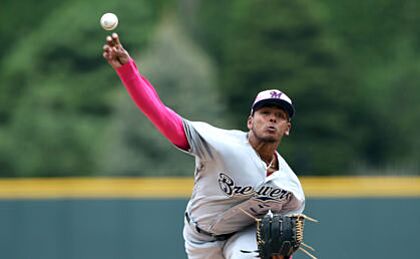 DENVER, CO – May 13: Setting up pitcher Freddy Peralta #51 of the Milwaukee Brewers throws in the 1st inning from the Colorado Rockies at Coors Area on May 13, 2018 in Denver, Colorado. (Picture by Matthew Stockman/Getty Illustrations or photos)

The Milwaukee Brewers have plenty of commencing pitching possibilities for the 2019 period. With spring coaching speedy approaching it’s time to speculate who will make the rotation and who will be relegated to bullpen obligation.

The Milwaukee Brewers have a logjam at the commencing pitcher position with a ton of fantastic but not excellent possibilities. The Brewers did not have a lockdown ace past 12 months, even though Jhoulys Chacin was their most responsible starter, particularly in the down the extend and in the playoffs. What they did have, and even now have coming into 2019, is a stable of guys that have all demonstrated flashes of greatness, but have lacked consistency.

There are a ton of issue marks for the Brewers coming into 2019 about how specific gamers, positions, and the team as a whole will conduct, but the largest issue mark is what will they do with the surplus of capable commencing arms. To Craig Counsell, this may possibly not seem to be like an issue looking at as his philosophy destinations them all in the similar group of “out getters”, but somebody has to get started the video games and Brewer admirers everywhere are on the edge of our seats asking yourself who will seize these commencing spots.

The Brewers plethora of possibilities at the moment contains Chacin, Zach Davies, Chase Anderson, Corbin Burnes, Freddy Peralta, Brandon Woodruff, and really do not forget a balanced Jimmy Nelson. There have also been rumors about getting another pitcher, like the risk of bringing back again Gio Gonzalez or signing previous Cy Younger winner Dallas Keuchel. There have also been rumors of buying and selling for an ace to put them more than the top, like Madison Bumgarner or Corey Kluber. Let’s take a glimpse at them all.