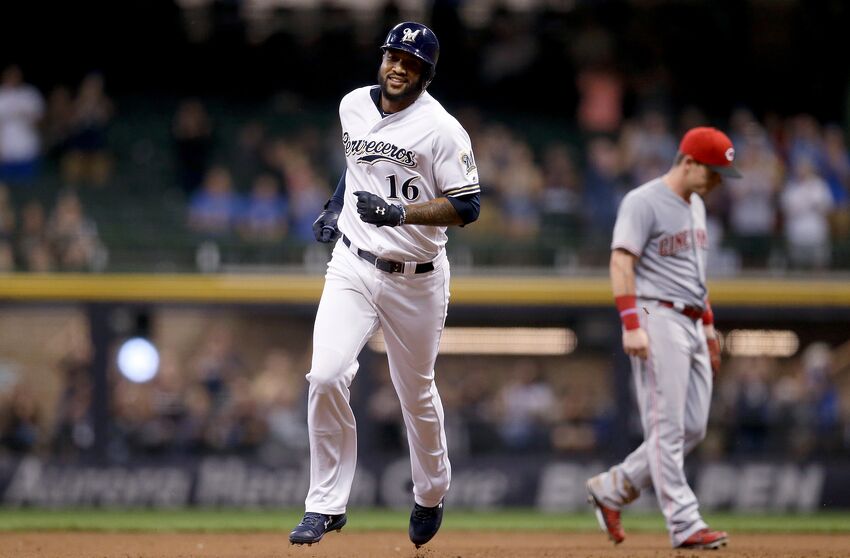 MILWAUKEE, WI – SEPTEMBER 17: Domingo Santana #16 of the Milwaukee Brewers rounds the bases after hitting a home run in the fifth inning against the Cincinnati Reds at Miller Park on September 17, 2018 in Milwaukee, Wisconsin. (Photo by Dylan Buell/Getty Images)

The holiday season has concluded and Mike and Sam are back. They talk about this weeks Milwaukee Brewers news and go over the Hall of Fame ballot as well.

It is 2019 and the Brewers edition of Dairyland Talk is back. This week Mike and Sam went through not just the Milwaukee Brewers, but everything in the baseball world that has happened the past few weeks.

The biggest news when it came to the Brewers was the Domingo Santana trade. After over a year of rumors, Domingo Santana was acquired by the Mariners in exchange for outfielder Ben Gamel (former Brewer Matt Gamel’s brother) and low-level pitching prospect Noah Zavolas. This was expected with Domingo Santana having an off year in 2018 and the fact that he is out of minor league options, but it’s sad to see him go.

In NL Central news, a lot of teams have improved. Especially, the St. Louis Cardinals. This past week, the Cards bolstered their bullpen by signing LHP Andrew Miller. Miller is one of the best relief pitchers in baseball and the late innings become scary in St. Louis with Miller and flamethrower Jordan Hicks.

Last, the Hall of Fame voting results are coming up on January 22nd. There are a lot of unbelievable players on the ballot this year like Mariano Rivera and Todd Helton, who have surprisingly been out of the league for five years. And there are also guys that are looking to join the Hall who have been on the ballot for years. It will be interesting to see who will be in the 2019 class.

Next: Brewers roundtable: Chances they make a big move?

Spring Training is right around the corner and Mike and Sam have your back. The two will be here every week to talk Brewers news and rumors. Just remember folks…pitchers and catchers report on February 13th.