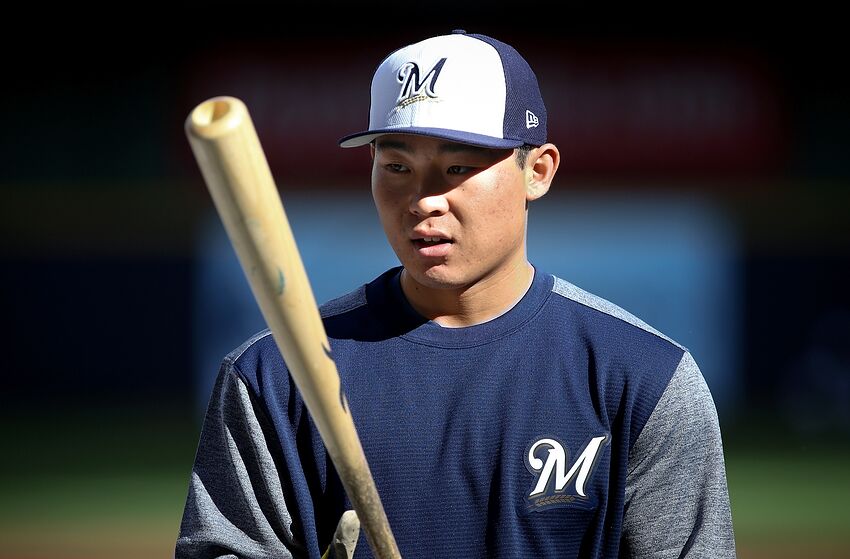 MILWAUKEE, WI – JUNE 21: Keston Hiura, the Milwaukee Brewers 2017 first round draft pick, participates in batting practice before the game against the Pittsburgh Pirates at Miller Park on June 21, 2017 in Milwaukee, Wisconsin. (Photo by Dylan Buell/Getty Images)

The Milwaukee Brewers future is bright and it all starts at the top of their prospect rankings.

During the 2017 MLB draft the Milwaukee Brewers used the ninth overall pick to select Keston Hiura. His draft stock suffered because of elbow issues leading into the draft.

Although Hiura was unable to play in the field defensively during his debut season, his ability with bat was clear. He played in 42 games to close out the 2017 season and he was impressive. The University of California product hit .371 with a .422 on-base percentage across the Brewers two lowest levels of the Minor Leagues.

Hiura began the 2018 season playing for the Brewers Advanced-A affiliate Carolina Mudcats and showed even more promise. He hit .320 with 228 plate appearances in 50 games. He also found his power stroke hitting seven home runs with 16 doubles and three triples before a midseason call-up to Double-A Biloxi.

Double-A proved to be more of a “struggle” for Hiura as his batting average “fell all the way” to .272. He also maintained his power numbers hitting six home runs with 18 doubles and two triples across 73 games. Considering that the 2018 season was his age 21 season, and only his first full season in the Minors, expectations are only rising for Hiura.

Hiura has all of the tools needed to have a successful MLB career. MLB Pipelines ranks him number one in the Milwaukee  Brewers system and number 30 overall in baseball. His 70-grade hit took will carry him to the Majors, but his solid ability in every aspect of the game will help him succeed.

It’s more than possible that Hiura will make his Major League debut at some point during the 2019 season. However, Hiura could just as easily be playing for another organization by the time the 2019 season starts. Milwaukee will surely engage in trade talks this Winter and Hiura will be at the top of every other team’s wish list.

Although trading Hiura would be hard for Brewers fans to stomach, the system is filled with potential Major Leaguers at the middle infield position. Brice Turang is the Brewers number three prospect and the slick-fielding shortstop has star potential.

The Brew Crew also has Mauricio Dubon coming back from a knee injury. Dubon was acquired in the Travis Shaw trade and is currently ranked seven in the Brewers system. If not for an ACL year, Dubon likely would have made an impact during the Brewers playoff run this season.

Next: Options for the Brewers 2019 rotation

With Hiura leading this impressive group of middle infielders Milwaukee has the firepower to make moves this offseason. The possibilities are endless for this organization and Hiura figures to be right in the middle of everything.