Timing is everything in life, and right now it’s particularly fun being principal owner of the Milwaukee Brewers.

Still, suggesting to Mark Attanasio at his team’s sold-out fan festival Sunday this must be about as good as it gets, he decided it best not to gloat.

“You always get nervous about (calling it) an all-time high because there’s nowhere to go then,” Attanasio said with a laugh. 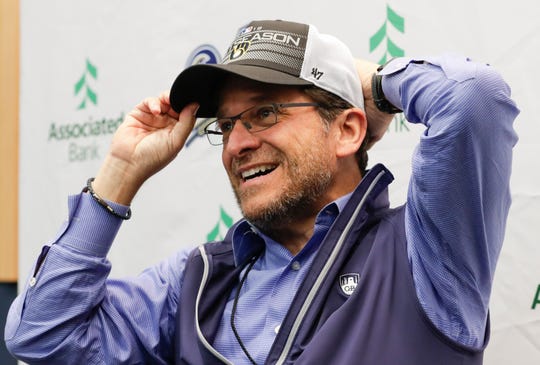 Brewers owner Mark Attanasio answers questions during a news conference before a game between Milwaukee and Detroit on Sept. 28, 2018. (Photo: Associated Press)

Nevertheless, these are heady days for Attanasio and the Brewers. For the first time, the “Brewers On Deck” event at the Wisconsin Center sold out in advance. After the team came within one victory of the World Series last fall, the buzz continued to grow, warming the hearts of Brewers fans despite the approaching polar vortex.

“Things have gone really well,” Attanasio said after answering questions on stage from those in attendance. “Ninety-six wins (ties) the most we’ve had in franchise history. We’ve got 135 sponsors; things are going pretty well on the business side.

“The experience at Miller Park, with the money we’ve reinvested in the ballpark and the stadium district, is the best it’s ever been.”

To reward the men who led the renaissance, on and off the field, Attanasio recently promoted general manager David Stearns to president of baseball operations and Rick Schlesinger from chief operating officer to president of business operations.

“It felt good to promote them together,” Attanasio said. “I was back here in December to thank our staff for a wonderful season. Only one team wins at the end of the year, so when it ends, it ends sharply. So, I wanted to come back in December and have a staff meeting and thank everybody.

“I keep track of the pulse here. Things are good. It’s our job to try to keep them good for as long as we can. Then, when it’s time to pivot, we’ll pivot.”

RELATED: Hiura, Dubon both content to await their turn with Brewers

Beyond drawing 2.85 million fans in 2018 in MLB’s smallest market, and watching season ticket renewals soar this winter to 98 percent, an unprecedented level, Attanasio recently discovered the passion of fans can be expressed in disapproving fashion. Upon announcing the naming rights for Miller Park had been sold to American Family Insurance, the Brewers experienced something of an uproar from upset fans, many of whom signed a petition to keep the original name.

“Miller has been a wonderful sponsor for us, and they’re going to continue to be. On an emotional level, I can see why it would resonate with fans to have the Brewers play in Miller Park. It’s been a terrific 20-year run. Things evolve in life, and we humans don’t always like change. But when you do change, sometimes it doesn’t mean it’s better. It’s just different.

“We think it will resonate with our fans every bit as much as it did with Miller Park. We reached out to American Family; they didn’t reach out to us. We’re always looking to optimize our business. American Family has been a (team) sponsor since 2001. They’ve been a company in Wisconsin since 1927. To me, it’s a complete win-win to be able to add American Family as a naming sponsor.

“American Family offered a compelling package to us that we felt we needed to respond to, to continue to deliver the best team on the field we can. We had an opportunity with American Family, right here, right now, and we decided to move forward with it rather than wait until the naming rights expired (in two years).

“It made sense for us to make this deal now and not wait. We might have a different economy then. Everybody is calling for a recession in the next couple of years. I’m not sure that’s going to be the case but if it is, now is a good time to make this deal for the team.”

Attanasio also figured it was a good time to put more money into his team on the field. With 21 players signed for about $113 million, and another $6 million committed to deferred pay and option buyouts, the Brewers figure to open the 2019 season with a payroll beyond $120 million, easily a franchise record. The previous high was $104 million in 2015, before they began stripping the club in a major rebuild.

To show he was serious about going for it again this year, Attanasio gave general manager David Stearns permission to sign the top free-agent catcher on the market, Yasmani Grandal, for $18.25 million guaranteed on a one-year deal, with a mutual option for 2020.

“We’re doing everything we can to compete, right here, right now,” Attanasio said. “The Cubs won 95 games last year. You know you have a special organization when you feel things are not so good when you win 95 games. The Cardinals don’t like being out of the playoff picture, so they added (slugger Paul Goldschmidt and reliever Andrew Miller).

“So, we were not going to sit still. David continues to look at ways to improve the team. We never know when or where that will come. We’re going to try to get better every day from now to Sept. 1, or whenever we can stop adding players.”