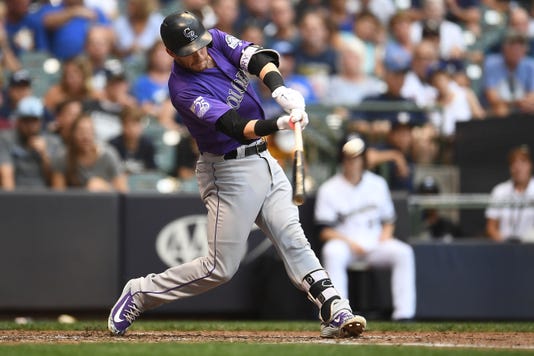 One day after the Milwaukee Brewers celebrated their Central Division title with champagne and beer showers in the tiny visiting clubhouse at Wrigley Field, the Colorado Rockies took their turn spraying away there as well.

They had to work much harder to knock off the Chicago Cubs than the Brewers did, however.

The Rockies scored once in the first inning and not again until the 13th, when Tony Wolters singled in Trevor Story with the go-ahead run in a 2-1 wild-card victory that propelled them into the National League Division Series.

Although the travel won’t be bad – a bus ride to Milwaukee is obviously better than having to hop on a plane and pass through time zones – the four extra innings the Rockies had to play could have an effect on them when they take the field for Game 1 at Miller Park late Thursday afternoon.

It took 4 hours 55 minutes to beat the Cubs, and manager Bud Black used his best pitchers to get the team to the finish line. Starter Kyle Freeland went 6 2/3 innings before five relievers – including closer Wade Davis and setup man Adam Ottavino – each pitched at least one high-stress inning.

The Brewers, meanwhile, should be in much better shape by virtue of their Game 163 victory over the Cubs on Monday.

They’ll have gotten two crucial rest days for reliever Josh Hader, who’s coming off a two-inning save, not to mention the remainder of a squad that finished out the regular season on an eight-game winning streak.

“Rest is nice,” said centerfielder Lorenzo Cain following Monday’s game. “We’re all banged up in some way. Every team is banged up right now. To get a few days to recover is huge.

“We have to continue to stay focused and understand that our main goal now is to get to the World Series, and when we do play again bring our A game and be ready to go.”

Milwaukee has had good success against Colorado so far this season, going 5-2 overall and winning both series.

Colorado, meanwhile, has gone 51-28 since July 2 and finished September on a surge similar to what the Brewers did to force the NL Central tiebreaker game with the Cubs.

The Rockies are an extremely dangerous offensive team with the all-star trio of centerfielder and leadoff man Charlie Blackmon, third baseman Nolan Arenado and the shortstop Story leading the way.

Story in particular has been a thorn in the Brewers’ side this season, lighting them up with a .333 average, seven home runs and 18 runs batted in. The latter two figures are season highs for Story against any team.

Led by Freeland – a likely top-five finisher in the Cy Young Award balloting in the NL – and Germán Marquez, the Rockies’ starting rotation was surprisingly solid. The bullpen has bounced back as well after some early season struggles.

“It’ll be a good series. We expect them to be on their game. They’re well-rested but once the adrenaline kicks in everyone’s going to be ready to go and fired up.”

Following is a game-by-game look at each of the teams’ seven regular-season meetings:

May 10 – Brewers win, 5-2. Lorenzo Cain hits a first-pitch home run off Marquez, who allowed 12 hits. Hernán Pérez puts the game out of reach with a two-run single in the fifth. Former Rockies starter Jhoulys Chacín pitches 5 1/3 innings to improve to 3-1.

May 11 – Brewers win, 11-10 (10 innings). Milwaukee rallies from an early six-run deficit to stun Colorado. Manny Piña hits a two-out, two-run homer to right off Davis to tie it in the ninth and Travis Shaw delivers a two-out, RBI single in the 10th to cap an inspiring early season victory.

May 13 – Brewers win, 7-3. Rookie Freddy Peralta makes his major-league debut after being called up from Class AAA Colorado Springs to replace an ill Chase Anderson. He makes it one to remember by striking out 13 in 5 2/3 shutout innings and picking up the victory. Shaw and Jesús Aguilar both homer.

Aug. 3 – Brewers win, 5-3. After flying all night to get back home following a 21-5 thumping at Dodger Stadium, Milwaukee gets to Davis again. This time it’s Eric Thames who hits a three-run walkoff homer to right to decide it. Junior Guerra spins a gem by going eight innings.

Aug. 4 – Brewers win, 8-4. Peralta turns in another good start against Colorado, striking out eight over six innings, while Shaw, Pérez and Ryan Braun all homer. Story hits a pair of homers to power the Rockies.

Aug. 5 – Brewers lose, 5-4 (11 innings). Right-hander Jon Gray handcuffs the Brewers with eight strikeouts over eight innings, then the offense comes alive with three runs in the bottom of the ninth to force extras. Arenado unties it in the 11th with a two-out homer off Knebel. Milwaukee gets two on in the bottom of the 11th, but Erik Kratz grounds into a game-ending double play.