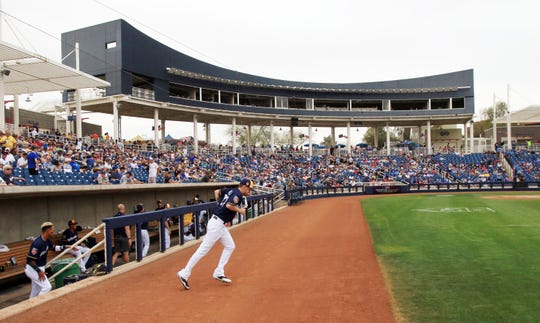 Pitcher Zach Davies leads Milwaukee Brewers onto the field at Maryvale Baseball Park last March for the final home game of the 2018 spring training season. Renovation of the ball park began last spring and will be completed in time for the home opener in February. (Photo: Roy Dabner, Milwaukee Journal Sentinel)

Excitement over the Milwaukee Brewers has carried into the off-season, with ticket sales up sharply for spring training games in Phoenix.

Fans making the trek south to see the start of the team’s 2019 campaign will enjoy a renovated and renamed baseball stadium, a $60 million project that the Brewers began last spring.

RELATED: Brewers can dream of what Maryvale renovation will offer after tour of construction site

“Ticket sales are very strong for the first season of Brewers Fields of Phoenix,” said Brewers Vice President Tyler Barnes. “Compared to this time last year, we have seen a dramatic increase in ticket sales down here.”

Barnes said the team’s success in 2018 — a remarkable playoff run that saw the Brewers fall one game short of the World Series — has carried over to spring training.

“We’ve hit on the ‘perfect storm’ of good momentum,” Barnes said. “The success of last year’s team is a key driver, and it’s timed perfectly with the opening of the new facility.”

A ribbon-cutting and dedication ceremony will be held at the new facility — formerly called the Maryvale Baseball Park — Feb. 12. However, the event is not open to the public.

The home opener in Phoenix will be Feb. 26 against the San Diego Padres.

The center of the project will be a two-story building that will house both major-league and minor-league complexes as well as team offices and many other amenities.

The complex will give fans “more opportunity to be closer to players throughout the complex as they practice and prepare for games,” Barnes said.

“The pathways fans take to and from their cars will have them surrounded by the practice and workout areas, so it’s no longer just an experience inside of the main stadium gates,” he said.

The strong interest in the Brewers also was evident earlier this month when the team’s annual ‘On Deck’ fan festival in Milwaukee sold out for the first time. This year’s ‘On Deck’ will be held  Sunday at the Wisconsin Center.

‘Vast majority’ of Brewers will return in 2019, and other notes from the end-of-season press conference
Milwaukee Brewers trade of Domingo Santana makes sense